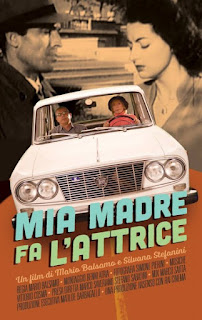 There will be a couple of screenings of Mia Madere Fa L'Attrice during the 33rd TFF (Torino Film Festival).
21 November 2015 - Cinema Reposi - sala 3 - 19:30
23 November 2015 - Cinema Lux - sala 3 - 11:45
The movie is about the director Mario Balsamo and his mother, Silvana Stefanini. She was an actress – for a short while – in the 1950s. Out of love and to tease her, he dedicates a film-portrait to her that is both the mirror of their relationship and the reenactment of an old movie she performed in (La barrier della legge by Piero Costa). Ironic and bemused, between Oedipus and cinephilia, the new feature film by Balsamo, whose movie Noi non siamo come James Bond won the Jury Prize at the 30th TFF.

Libellés : NEWS
Email ThisBlogThis!Share to TwitterShare to FacebookShare to Pinterest