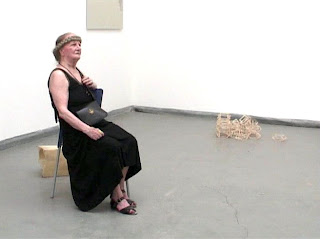 In conjunction with “Carol Rama: Antibodies,” the New Museum (NY) will present a special one-night-only screening of the award-winning documentary Carol Rama: More and Even More (2003), with introductory remarks by Helga Christoffersen, Assistant Curator. The film, directed by Simone Pierini, will be shown for the first time in the United States. It provides an entry into the life of this distinctly under-recognized artist, further contextualizing her highly original and spirited oeuvre—which is the focus of “Antibodies,” the first New York museum survey of Rama’s work and the largest presentation of her work in the US to date.
Carol Rama: More and Even More is a documentary about the life and artistic output of Carol Rama (b. 1918, Turin, Italy–d. 2015, Turin, Italy), who takes on the role of a guide in the film. The camera follows the artist, inviting viewers to visit places close to her heart. Her own words and stories, as told by the people surrounding her—artists, art dealers, friends—allow the director to paint a multifaceted picture of the Italian artist.
Carol Rama: More and Even More was included in the official selection of the Locarno International Film Festival. It also won a special prize at the Palazzo Venezia’s Art Film Festival in Rome.

Libellés : NEWS
Email ThisBlogThis!Share to TwitterShare to FacebookShare to Pinterest